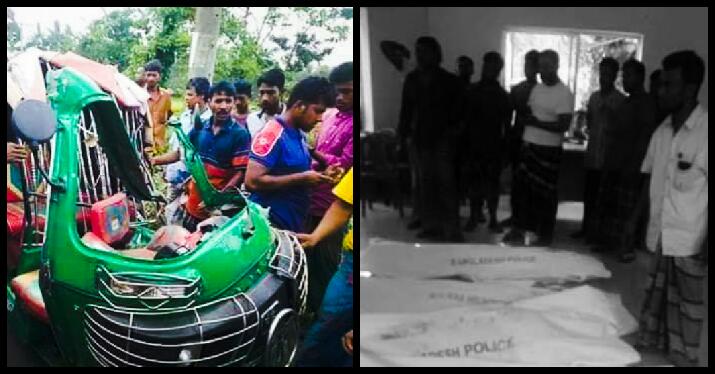 A running bus hit a three-wheeler CNG in Shahrasti Upazila of Chandpur on Sunday (28 April). In the road accident, 6 people died and one severely injured.

This grievous accident took place around 9:15 am when a bus rammed an oncoming auto-rickshaw on Chandpur-Cumilla regional highway near Kakoirtola Bazar area. The identity of the deceased are revealed. They are Ranjit Chandra (52), Fakhrul Islam (75), and Shahjahan (45) of Kachua Upazila, Abul Kalam (62), Moni Begum (28), and her son Rumman Hossain (8) of Shahrasti upazila of the district.

The five of them accept Shahjahan died on spot. After taking him to Cumilla Medical College Hospital, he died too. Jihadul Kabir, superintendent of Chandpur police informed that the driver of the bus was also injured in the accident and admitted to Cumilla Medical College Hospital for treatment and the bodies were kept at Shahrasti Upazila Health Complex.